How to Reheat Cinnamon Rolls? Few Methods and Recipe

How to reheat cinnamon rolls? Cinnamon rolls are comfort food for most people. However, the aromatic smells of cinnamon and freshly baked dough and the soft, warm texture of these rolls make them irresistible for anyone. To enjoy this delicious treat, the best way to eat it is warm and hot.

When you keep the cinnamon rolls at room temperature or in the freezer for later consumption, they tend to get hard and dry. You won’t get the real taste of cinnamon rolls if you eat them cold.

Reheating cinnamon rolls can bring their original taste back. However, there are some ways to reheat them to preserve their best flavor. Want to know how? You will know it here. But now, let’s learn a bit more about cinnamon rolls.

Making cinnamon rolls is relatively easy. Everyone can enjoy this sweet delicacy at home with just a few efforts. The rolls are made of dough which contains milk, yeast, brown sugar, melted butter (not hot), salt, egg, granulated sugar, flour, and warm water.

The filling is made of melted butter, sugar, and cinnamon. For the frosting, sugar and butter are commonly used. Other ingredients like cream cheese, vanilla, etc., are used based on the baker’s preference.

How to reheat cinnamon rolls? 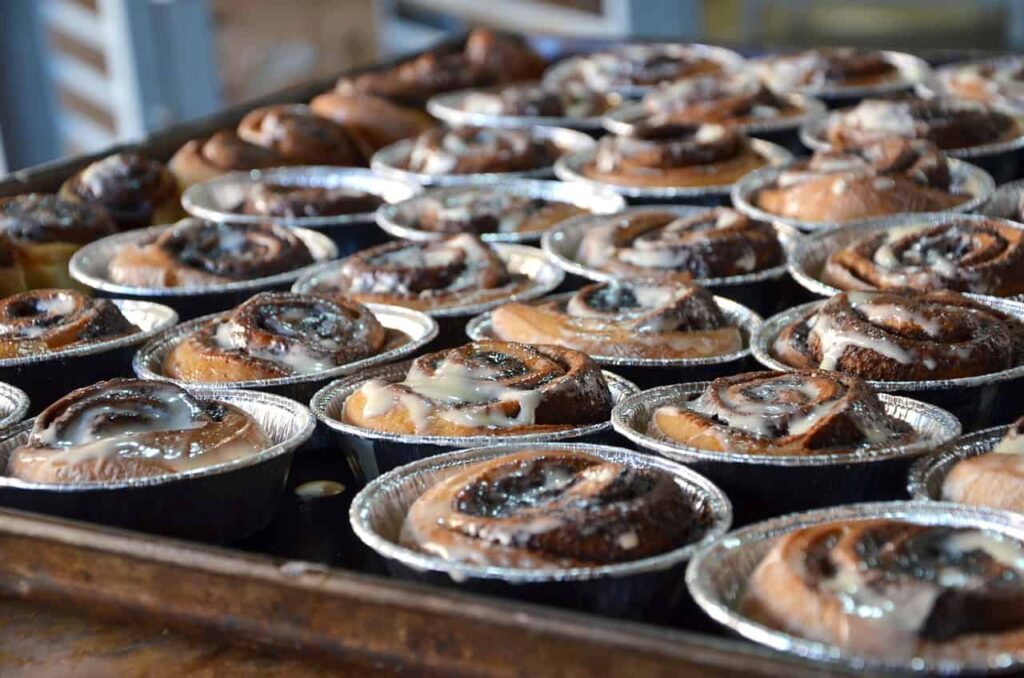 You can either use a microwave or oven to reheat the rolls. The stove gives a better result, so reheating it in the oven would be better. Here are the steps to reheat cinnamon rolls in the oven-

Preheat the oven at 350°F. If your cinnamon rolls are frozen, you have to thaw them first. For this, shift the rolls from the freezer to the fridge overnight.

Restore moisture in the cinnamon rolls. If the rolls have lost all their moisture, this step is necessary. Before putting them into the oven, brush them with melted butter. If you don’t want to use butter, you can spray a little water as well.

Don’t overspray it. You don’t have to soak the rolls in the water. A little spray would do the job. Next, wrap the cinnamon rolls in aluminum foil while baking. It will lock the moisture and make them tender again.

If your cinnamon rolls are sitting in the fridge just for some time and they still have their moisture, you can avoid coating them with butter or spraying them with water. Instead, just put them directly in the oven.

Bake! Now is the final step. Put the tray of rolls into the oven and leave it there for ten minutes. Check after ten minutes. If you think they need a little more baking, put them back again for a few more minutes.

Once done, let them rest for a while and devour them!

This is a faster method of reheating cinnamon rolls. A microwave will reheat them in just a few seconds. However, you need to be careful not to overheat it. Otherwise, the rolls will get dry and hard.

Like the oven method, here also you can use butter or water to help regain the moisture.

Place the rolls on a plate that is microwave friendly. Make sure not to stack the rolls on top of each other. If you have lots, reheat them in batches.

Now spray little water or brush melted butter for moisture. You don’t have to wrap the rolls in aluminum foil while heating them in the microwave.

Put the rolls in the microwave for fifteen seconds. After 15 seconds, take out the plate and check. If needed, you can put them back for another ten seconds but no longer than that.

Be careful not to overheat the rolls. If you do, they will be ruined and become inedible.

Here again, you need to use water for moisture retention. Sprinkle around one tablespoon of water into each roll. You can use butter as well, and if you want can add extra icing too.

Take out after four to six minutes and serve hot.

Place the pan on low to medium flame. Let the pan warm up for a few seconds. Next, place the cinnamon rolls and cover them. Leave it for ten minutes, and your yummy treat is ready to eat.

How to store cinnamon rolls? 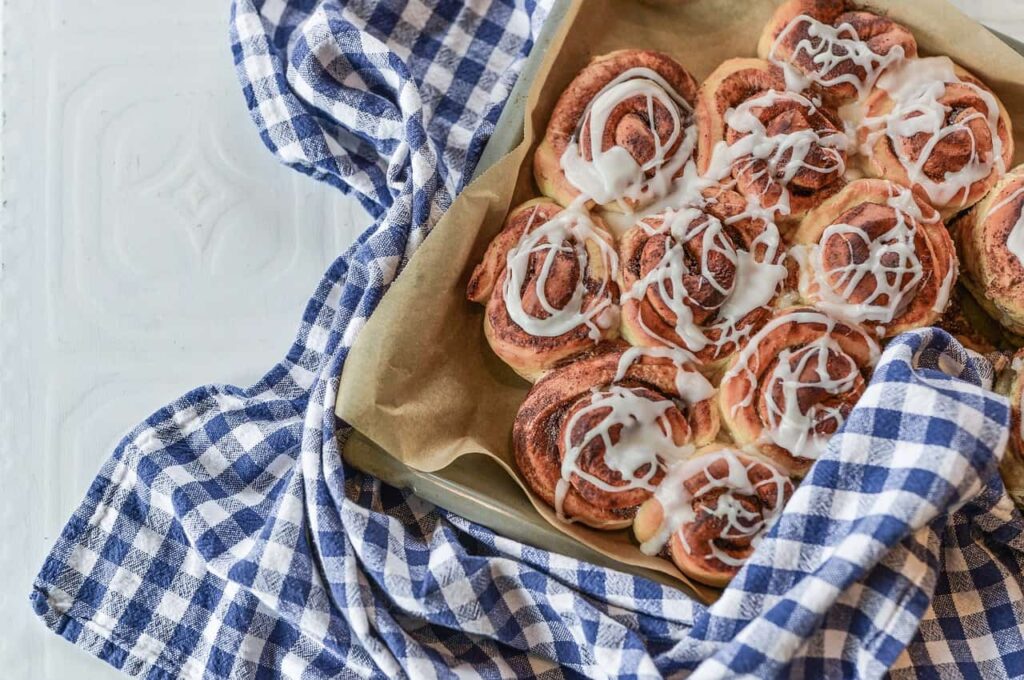 Don’t worry! There is a solution to that. You can prepare them in bulk and store them in the freezer. Moreover, you can keep cinnamon rolls at room temperature for up to 48 hours.

Keep them in a heavy-duty freezer bag for large quantities, and they will last up to one month. Don’t refrigerate.

To freeze the rolls, make sure you let them cool completely before storing them. The container should be completely dry as any condensation will make the rolls soggy. You can place a paper towel before placing the rolls in the container.

For best results, wrap the rolls individually. It will ensure as little air as possible and retain the actual taste of the cinnamon rolls. Also, while many people advise refrigerating them, it’s best not to do so. The rolls will become very hard after a few hours in this case.

Before freezing cooked cinnamon rolls, you need to cool them completely. After they are completely cooled down, wrap them individually in plastic paper. Next, take an airtight freezer bag and place them. Remove any moisture from the bag as well. You can store these rolls for up to one month.

One way to remove air from the bag is by using a straw. First, close the bag entirely and leave a hole enough to put in the straw. Now suck the air out entirely and pull out the straw. Immediately zip the bag.

Cinnamon rolls with cream cheese can be kept at room temperature for two hours. However, keeping them longer or overnight will ruin them, and it is best to throw them.

When is the time to discard stored cinnamon rolls?

Cinnamon rolls remain fresh for three days at room temperature. If you reheat them after that, they will become stale. For longer preservation, you can store them in the freezer for one month to three months.

However, they tend to lose their actual taste after two to three weeks. After that, the rolls will lose their moisture entirely, and a noticeable taste difference is there. 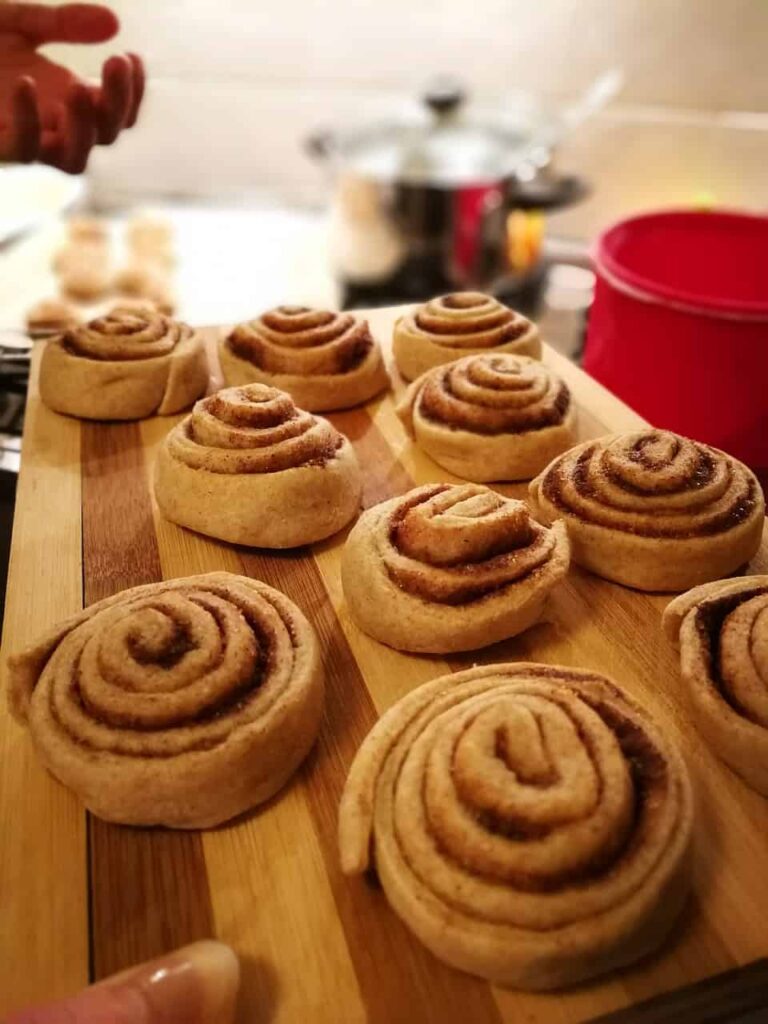 After reading all the reheating and freezing techniques of cinnamon rolls, your mouth must be watering to taste some. But, don’t worry; you don’t have to step out of your home to have some. Making these rolls in the home kitchen is relatively easy, and they taste as good as any bakery-made one.

Ingredients for the dough:

Ingredients for the filling:

Ingredients for the icing: 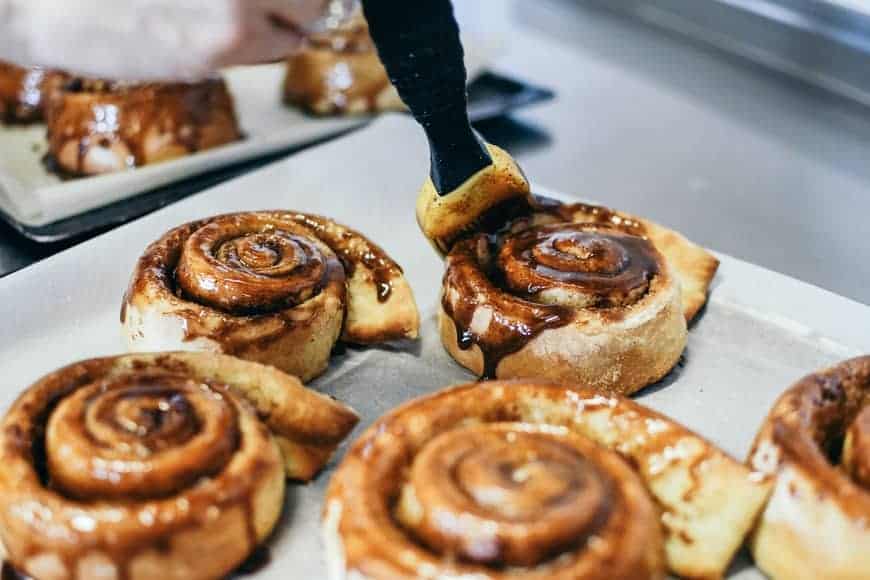 You can also prepare the dough a night prior. Or you can even prepare the uncooked rolls the previous night and keep them covered and refrigerated. Then, the next day before baking the rolls, let them sit for thirty to sixty minutes after taking them out of the refrigerator.

Cinnamon rolls are one of the most popular appetizers. The soft texture and mouth-watering filling can make anyone fall for this sweet treat. You don’t have to visit a bakery every time you want to eat them. Instead, you can keep cinnamon rolls in your freezer and reheat them whenever you feel like grabbing a bite.

This post explains in detail how to reheat cinnamon rolls to their original taste. Reheating is easy and quick. So what’s stopping you now?