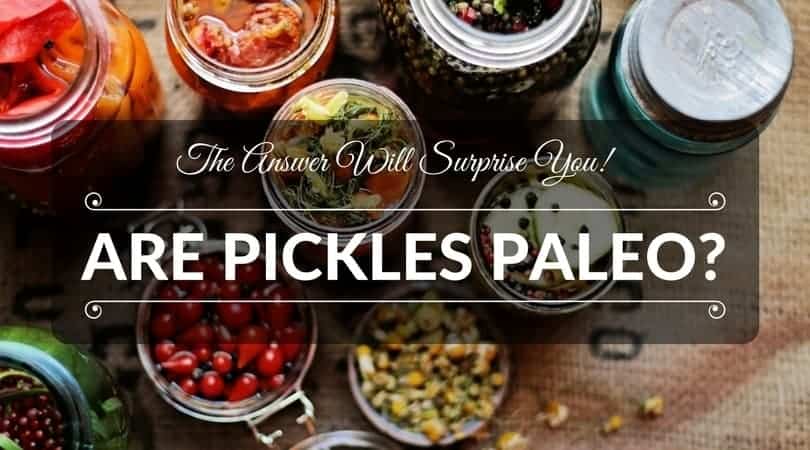 Are Pickles Paleo? (The Answer Will Surprise You!)

Dieting has been an undying trend for many years. You may have tried a couple of diet plans and will still be trying one in the future once you find something that you feel will work for you. One of the most talked about diet plans currently is Paleo. It is essentially based on the diet of people during the Paleolithic era which is whole, unprocessed and nature-based.

Of course, like all diet plans, there is food that you are allowed and not allowed to consume. With Paleo, there had been several food items that sparked discussions if they could be eaten or not. Pickles came as a recent, interesting question. And so, are pickles Paleo? Before we delve into that deeper, let us first know a thing or two about pickles.

Are Pickles Paleo?
What Are ﻿Pickles﻿?
Are Pickles Paleo?
Health Benefits Of Pickles
It Is A Good Source Of Antioxidants And Nutrients
Offers A Dose Of Probiotics
It Has A Glucose-lowering Effect
Helps Reduce Ulcers And Helps In Digestion
Helps In Protection of The Liver
Final Thoughts

Pickling is a process of preservation. It is done by immersing food in a brine of salt, water or vinegar. There are two ways of pickling wherein the first one is by preserving food in vinegar. The second is by soaking food in salt brine which encourages fermentation to take place.

Pickling allows the growth of “good” bacteria which actually decreases the food’s vulnerability to “bad” bacteria that causes spoilage. The most common examples of fermented pickling are kimchi and pickled cucumbers. The process of pickling also affects the texture and flavor of the food. Meat, fruits, eggs, and vegetables can all be pickled to expand their lifespan.

If we get back to the basics regarding Paleo, we’re taught that it is based on the diet of people during the Paleolithic era. Back then, picking has not been done yet. Food consumption included nature-based, plant-based, and unprocessed meat.

It Is A Good Source Of Antioxidants And Nutrients Cooking food can break down some of its nutrients. Pickling food not only preserves the food itself but more importantly the nutrients and its antioxidant ability. Antioxidants are the ones protecting our body against free radicals.

Offers A Dose Of Probiotics

The process of fermentation in pickling breaks down the sugar in food into lactic acid. Also known as the “good” bacteria or probiotics, it aids in gastrointestinal issues. It also helps in the process of properly digesting food.

It Has A Glucose-lowering Effect Pickles or pickled food that has vinegar as an ingredient is known to have an anti-glycemic or glucose-lowering effect. Consuming pickles can slow the digestion process which helps your stomach to slowly release glucose. This prevents your blood sugar from spiking after a meal.

Since pickles or pickled food contain probiotics, these greatly aid in digestion. In addition, consumption of Indian gooseberry pickles helps in reducing ulcers. The weakening of the mucous membrane can lead to internal wounds called ulcers.

Helps In Protection of The Liver

Pickles or pickled food not only helps in digestion but it also helps in protecting your liver.

The gooseberry pickle has hepatoprotective qualities. It can help reduce liver damage or hepatotoxicity. Pickles or pickled food may not be considered as part of Paleo but its benefits should be taken into consideration. Choosing a diet plan can be helpful in improving your health but you can also explore other ways or means that you can add to your diet plan to have better results.

However, you must remember that with everything you do, always do it as a way of taking care of yourself. This decision is of crucial importance. Whatever diet plan you may decide to be on, always look into how it will benefit you. Self-improvement, especially when it comes to health, is considered as self-love.

Was this article helpful in answering your questions about pickles or pickled food? Have you tried pickles yourself? Do you have other ideas that you want to share with us? You are always welcome to share your feedback, please leave a comment below.

Paleo is my favorite. I have tried it much more times but never tried like this way. This is a unique method. I will definitely try it tonight. Thanks for the awesome share.