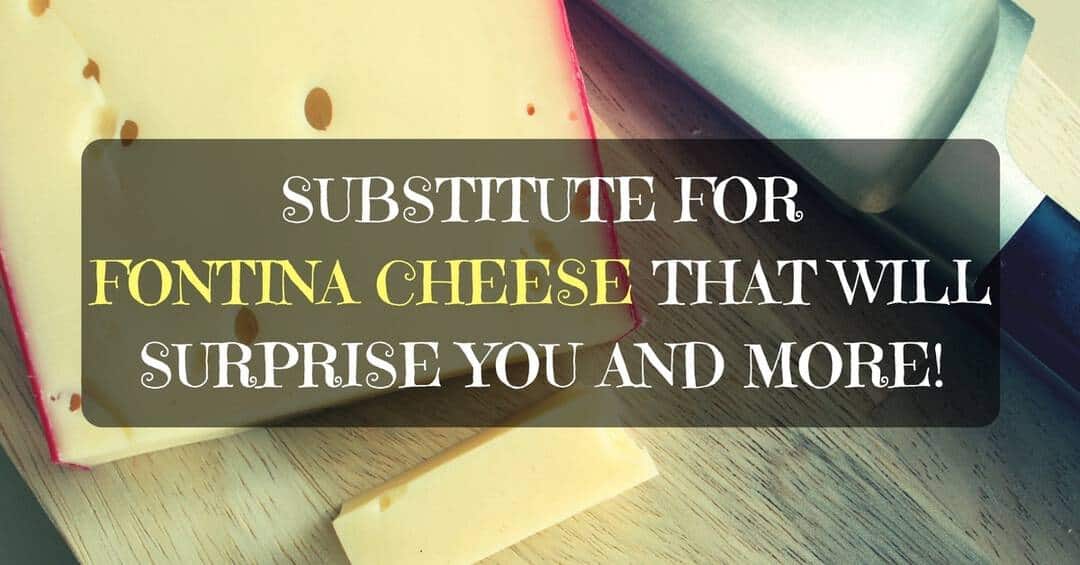 Substitute For Fontina Cheese That Will Surprise You, And More!

Your reasons for substituting Fontina cheese are not unfounded. This prized cheese that originates from the Aosta Valley of Italy is infamously unavailable in so many places that people would naturally look for its replacements. I’m writing this article for those who are looking for the best substitute for Fontina cheese.

There are a number of replacements out there for this elusive cheese! It might surprise you to know that these substitutes can essentially take the place of it and render its taste, flavor, aroma and the texture that it’s globally known for.

Fontina Cheese Substitutes You Must Try:

Italian in origin, Mozzarellas are used in either its grated or shredded form. You can also use it in its smoked version — the mozzarella affumicata. As such, this is widely used in salads, soups, pizzas, meat, sandwiches, and lasagna.

While this cheese is celebrated for its wonders on preventing aging, this can also be one of your costliest substitutes for Fontina cheese. Mozzarella was originally made from milk and was obtained from the water buffaloes of the region. However, it’s now manufactured from cow’s milk.

Did you know that mozzarella cheese is enriched with zinc? Find out more in this video.

As one of the most highly consumed cheeses in the world, Goudas is also known for having one of the most superior tastes in the cheese variety. Likewise, it is obtained from cow’s milk along with sources from goats and sheep that are deemed to be as popular for some. Meanwhile, goudas can be developed from pasteurized and unpasteurized milk.

A huge “thank you” is in order for The Netherlands for bringing this product globally. Here’s an interesting video showing how the gouda cheese market operates in this European country.

Perhaps my most favorite out of the bunch, Gruyér﻿﻿e is considered the closest Fontina substitute! Akin to how Fontina is manufactured, this one is also processed from raw, unpasteurized cow’s milk.

If you feel like enriching your food color, Gruyére would also beef it up due to its yellow color. Meanwhile, it also has a dense texture and nutty taste that are also very much pronounced in Fontina.

This cheese also has a complexity of flavors! At first bite, it’s giving a promising fruitiness while its subsequent taste provides nuttiness and more earthy flavor. On the other hand, this is not ideal for vegans and those who are watching their fat intake as it contains 40 to 46 percent of fat intake. Because cheddar cheese is widely used in sandwiches and pizzas, you won't go wrong when you substitute this for Fontina. I’d suggest you ripen this cheese more so you can really taste its essential flavor.

Cheddar is made from both skimmed and whole milk, in case you’re wondering why it’s producing different colors. Now, if you’re into its etymology, cheddar is named after one of the processes in cheese making called “che﻿﻿ddaring”.

Cheddar is also ideal for you if you’re into appetizers, casseroles and other types of breads. Probably its most glorious use, well at least for me, is its presence in most dips and desserts! Another entry from The Netherlands, this semi-hard cheese is best recommended for fruits and fruit salads. It also goes well when put together with breads and some meaty foods. Also, I’ve heard that Edam goes well with pastas and crepes when it is used in its melted form. I often have this with wine when I'm hosting Friday nights with my friends.

Edam is likewise pale yellow for its color. However, it ages and hardens once you keep it for long and unused. As such, this quality would render this cheese as most traveler’s go-to cheese!

Now, if you’re watching your fat intake, Edam is valued for its low fat content — just good, if not a better substitute for Fontina. Also a part of the semi-hard cheese variety, this type of cheese has o﻿﻿ri﻿﻿ginated in Switzerland and is made from unpasteurized milk. It’s known for its availability in medium-sized chunks and visible holes on it. It’s also noted for its spicy taste. This could even get spicier as it ages. This cheese’s tangy taste is the reason why almost everyone prefers this substitute. Also, it comes in many different shapes; its pear shape being the most commonly seen shape at the markets.

Provolone also comes in a light yellow color and could be used as a cooking cheese option or even if you’d like to embellish it as a grated cheese. You can see this type on cheese mostly on pasta, soup, and salad dressings. My mother used to go for Provolone when she was at a phase of making pasta all week.

You're not living if you haven't had any parmesan cheese! Its extreme popularity among pizza lovers and pasta worshippers is very well-deserved as it also contains a not-so-high sodium content.

Parmesan is thick, dense, and nutty. and is easily one of the substitutions for Fontina. This cheese is also famed for its shade of light brown or a hay-colored nature. Parmesan can be grated smoothly over soups and risottos. My daughter who I used to catch munching on this cheese is now getting a load of it whenever she feels “snackish” during a leisurely evening.

Watch this video if you want to know how to make parmesan cheese. It now looks like a battle between The Netherlands and these Swiss cheese varieties. This next Swiss entry from Emmental has a strong odor and is noted for its slight pungency at times. It’s a hard cheese type that is made from a cow’s unpasteurized milk.

Meanwhile, Emmental has an acidic flavor and is quite fruity in taste. You might have also seen its big holes that are essentially its hallmark feature. One of the priciest cheeses out there, this cheese type is also one of the most difficult cheeses to make.

Emmental is ideal for those who would like to enhance their several types of sauces and grilled sandwiches. Its nuttiness makes it an ideal go-to snack with your fondue and fruits!

Denmark’s only entry on the list, this cheese type is notable for its rich and creamy feature that just melts away gloriously on your taste buds.

Havarti is widely used in fruits and wines. And if you’re making pastas and sandwiches, this Fontina cheese substitute can be used alongside the different herbs and spices. You want to store your Havarti at a room temperature if you want to taste it at its best state.

Watch this video to check on how to make your own Havarti cheese.

A known Havarti companion in fruits and wines, Bel Paese can also be used in pizzas, fondue, desserts and fillings. Italian in origin, this cheese form has a lingering taste and smell of milk that can easily be melted.

If your recipe or food requires a thick texture, then this type of cheese is ideal as a Fontina substitute.I always render my Bel Paese in delicate slices to complement its semi-soft texture that just goes well with any type of wine your friends might be bringing. This list is evidence that substituting your Fontina cheese isn’t that tricky, to begin with. From the easily-melting Bel Paese and the always-trustworthy Parmesan, its replacement can only be more beneficial if you’ve come to know why you’re substituting it in the first place. Once you’re done with that step, then choosing that right variety won’t be an issue. Almost all of these suggestions are readily available at stores near you!

If you think I missed something like an ideal replacement for Fontina cheese, please feel free to add it on the comment section below! Until then, happy cheese hunting!