How Long Can Spaghetti Sit Out? Info and Storage Tips

Spaghetti is one of the most popular appetizers all over the world. People in different regions enjoy it wholeheartedly. Traditionally, spaghetti can be traced back to Italy. However, it has stretched its limits beyond the ocean. Many foodies have a habit of keeping the leftover spaghetti for use in the future. But, the concerning fact here is to trace whether the spaghetti is okay to consume. How long can spaghetti sit out? We are going to tell you all about it.

Even if you are storing the extra food in the refrigerator, there are chances that the spaghetti is being spoiled over time. But, how much time is that?

That is precisely what we are going to discuss in this article.

How Long Can Spaghetti Sit Out? 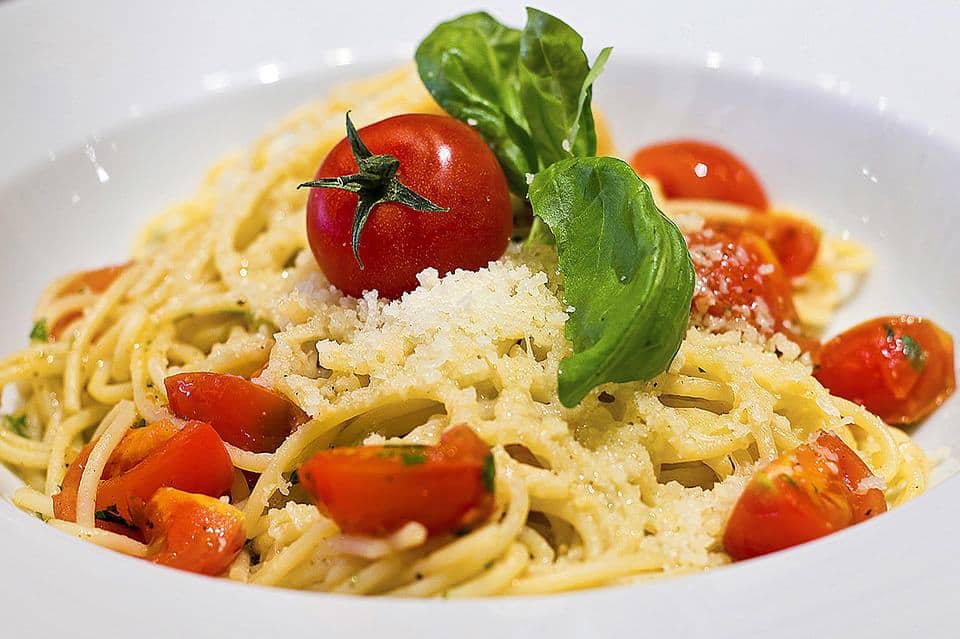 Spaghetti is a particular type of pasta that is pretty popular among people of all ages. If we speak about the uncooked version, it has no danger of spoilage for up to four or five years. You need not keep it in the freezer also. It can be intact at room temperature and can survive a long time in your pantry.

However, we might think a little differently about cooked spaghetti. No matter whether it is only boiled or mixed with sauce, it will start rotting within a couple of hours if you do not keep it in the refrigerator.

Scientifically, the bacteria growth maximizes when your food enters any temperature above 40 degrees Fahrenheit. That means if you plan to keep your cooked spaghetti for hours, that will not be suitable for your stomach. And therefore, you might have to throw it away in the trash can.

How Long Can Spaghetti Sit Inside The Fridge? 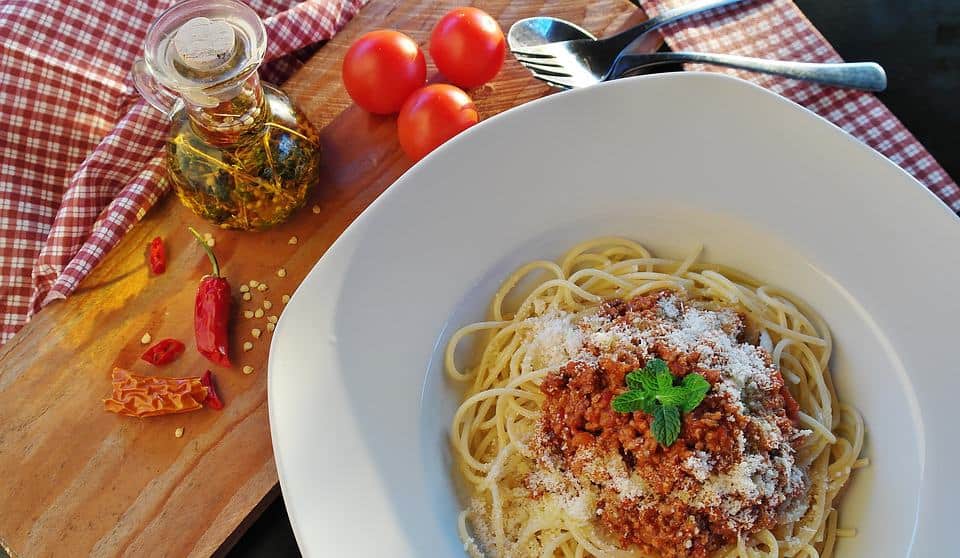 I know this is the most intriguing part. When we mentioned your spaghetti might spoil at room temperature, one idea that came to your mind was the refrigerator. Well, you should know that storing in a refrigerator also has a specific time limit. You can not enjoy the leftover spaghetti for months.

While storing cooker pasta inside the fridge, you should set the temperature lower than 40 degrees Fahrenheit. Following this, you might save yourself a plate of spaghetti for the next four or five days. After that, you might spot spoilage in the food.

How To Tell if Leftover Spaghetti Has Gone Bad?

Like any other food item, spaghetti also has some signs of spoilage. Unless you know the factors, you might not be able to spot rotten spaghetti. And eating spoiled spaghetti is probably the last thing in the world you have ever wanted.

Now, let us explain what can be the most striking spoilage indicators.

On a general note, four-pointers are noted or observed when the spaghetti is spoiled:

Well, slime is a significant visual indicator of spoilage. Fresh pasta or spaghetti will never have a slimy texture. Sometimes the gravy or the sauce might make it a little juicy. But that is not similar to slime. Once you spot that jelly-like texture in or over your spaghetti and let’s say your fingers are covered with it ( sounds gross, I know!), it is time to throw the food away.

This is another major point to identify spoiled spaghetti. Take any freshly cooked food, and you will have a tempting smell hovering in the air. The aroma is so pleasing and appealing that you can not resist your stomach’s growling. Even sometimes, you may drool! Jokes apart! The spoiled spaghetti will have a pungent, sharp sour smell coming out from it. It will never be pleasing. Instead, you would want to throw it away at once. You must spot the difference between the fresh and rotten smells by yourself. Otherwise, you’ll end up hurting your intestines and stomach! 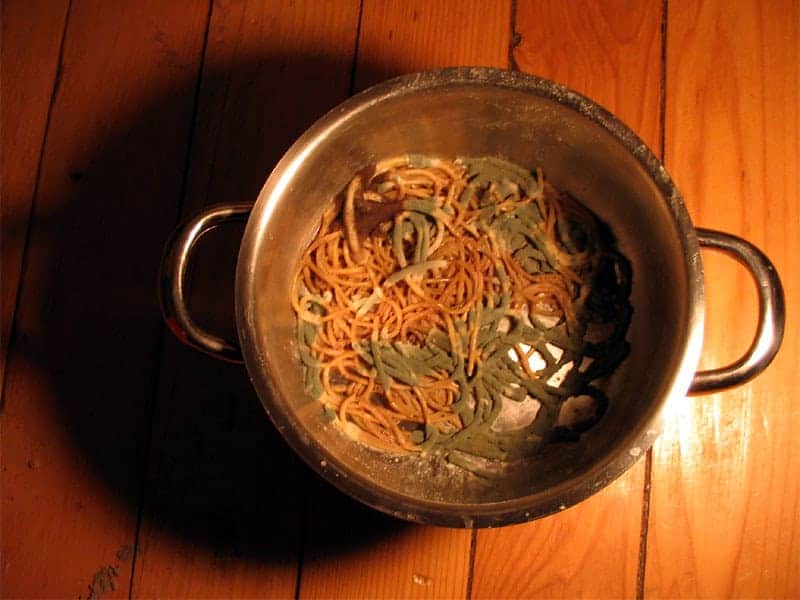 This is a clear hint of rotten pasta. If you see mold on the food, you should understand that the food is spoiled entirely. Mold can degrade the natural ingredient, which is spaghetti in this case. Therefore, it spoils the food. It looks something like velvet or sponge. It builds a colony over the moisture area and starts degrading the source.  If you eat something containing mold, there are chances of food poisoning, stomachache, and many other digestion-related issues. So, your job is to throw the pasta.

Color can be another excellent hint. Every food item has a specific color when it is fresh. In this case, it is yellow or pale golden. Once the spaghetti starts to spoil, it turns white or pale yellow. If you see something like that, you should realize that the food must be thrown away!

How To Store Spaghetti? 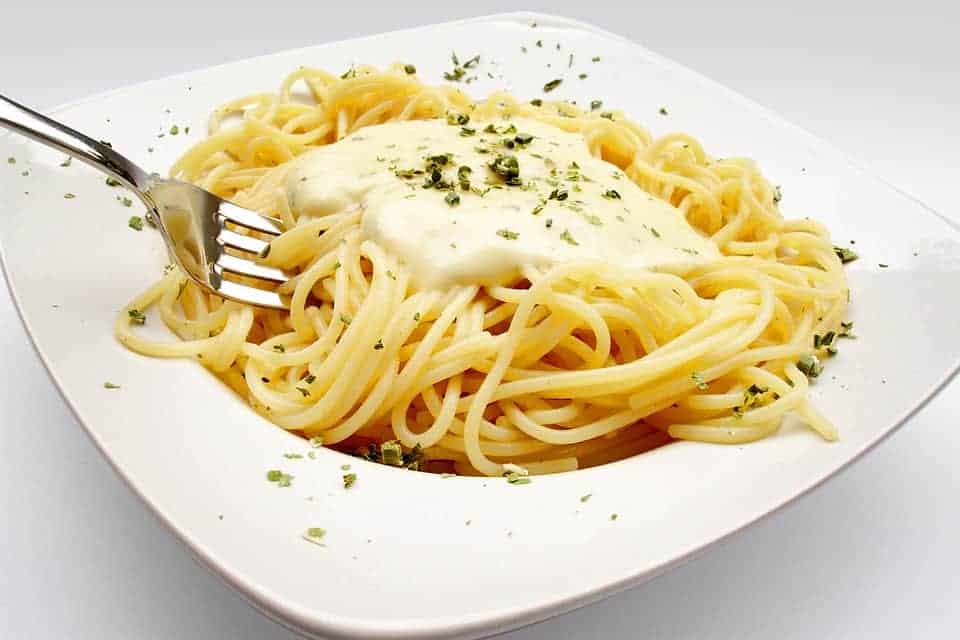 If kept properly, you can store your cooked spaghetti for up to five to six days. I’m sure you are dying to know the appropriate ways to store a batch. Here’s what you need to do.

Whenever you plan to store spaghetti, you should separate the sauce from it. It is best to keep the sauce, the meatballs, and the boiled spaghetti separately. Otherwise, the moisture in the gravy will quickly get the whole batch spoiled.

Set the temperature at 40 Degrees Fahrenheit or lower than that, and boom! You are good to go for almost one week.

So that was all about spaghetti and its shelf-life. Like any other food in the world, you can increase the shelf-life of spaghetti or pasta. However, there are some steps or ways that you should follow for better results.

Make sure you keep the temperature optimal if you keep the leftovers in the refrigerator. Check all the spoilage pointers once before eating because you don’t want to trouble your stomach.

We hope this article helped you find all the answers to your spaghetti storage questions.