How To Find the Best Milk For Lattes

Coffee and milk have always been friends, and one of the most famous children of these two drinks is certainly the latte. Since their invention up to now, lattes have become wildly popular all over the globe. The mix of energizing coffee and warm, creamy milk creates a delicious combination that's hard not to enjoy.

These days you can find lattes on every corner as well as millions of people running to get their fix from early morning until evening hours. They also come in different flavors and sizes, so they've evolved far beyond your boring milk/coffee blend.

As with many things in life, there is a right and a wrong way to prepare a latte. Of course, tastes differ so not everyone will prefer the same thing, but according to industry standards, a proper latte requires adequate skill and ingredients to make.

One of the biggest factors for whipping up a good cup is the milk. Not all milks are made equal, and in this article, we will discuss and uncover what is the best milk for a latte. Bear with us as we dive further into the topic. Caffe latte literally translates to 'milk coffee, ' and it has been a quintessential part of the Italian (or generally European) lifestyle ever since the 17th century. Be careful how you order this drink in Italy, because if you say just 'latte' you will probably get a glass of milk.

Back in the old days, the latte was known as a breakfast drink, and its original version was quite different than the one we know today. The modern form was invented and popularized by American commercial cafes. In recent years, there is a great variety of lattes available – from iced to caramel flavored and vegan

How To Choose The Best Milk For Latte

In order to be sure that you're making a good choice when going out to get some milk, we will try to educate you about the qualities of this drink important for latte making.

Milk By Animal Of Origin

Since there's more than one beast that humans have managed to domesticate, it would be unfair not to inspect different kinds of milk regarding the animal of origin

Cow's milk is the most widespread variety and is considered a standard in today's coffee making world. Known for its sweetness and subtle flavor it has been used as an addition to coffee for centuries. 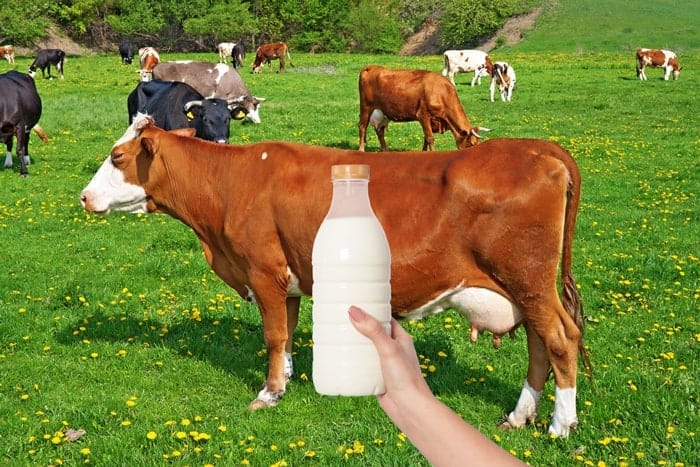 As far as baristas are concerned, they mainly look at the fat percentage of the milk since it is crucial for proper texture. If don't wish to experiment or get wild then simply go for the cow.

Goat's milk might not sound like the first choice for lattes, but before you make a strange face know that there are some coffee roasts that actually combine well with the tangy flavor of this milk. These are usually medium roasts as goat's milk will add a complimentary note to their aroma.

Water buffalo milk – we admit, it's not for everyone, but those who like it can't get enough of it. It is rare, hard to find, and what makes it special is the heavy fat content. Be careful when using it with coffee because its flavor will take over the cup if used in a large amount so use it sparingly.

Vegans or people who are allergic to milk can also enjoy lattes, but they only have to find good, non-dairy milk.

Soy milk is usually what first comes to mind when speaking about plant-based varieties. It's used very often with ​latte machine, and many people prefer it over cow's milk. The problem with soy is, again, allergy and it can never create a foamy texture as animal milk does. Almond milk is becoming increasingly popular in the coffee brewing world. Its taste is milder than that of soy milk, but the fat content is a bit higher. The best possible solution would be if you could make your own, fresh almond milk; if not, store-bought is also ok.

After dietary fat was announced to be the main culprit in causing heart disease and other health problems, the majority of people have switched to skim or nonfat options. This fat-is-evil myth has been busted in the following years and in case of coffee preparation fat is your friend.

Whole milk contains around 3.25% of fat, and this allows the latte to have a creamy and foamy texture beloved by many. Even though it's called 'whole' know that the fat content is far lower than that of fresh, straight-out-of-the-cow milk. But, if you are a consumer, this is probably the best you'll be able to find, and it is good enough.

Skim or reduced fat milk will just not give you the texture or the flavor needed for a good cup of latte, and they are much better for cappuccinos or similar drinks that require a lot of foam and a bit of sweetness.

As we've mentioned before, the way animals are raised will greatly impact the flavor of their milk. If this sounds too crazy, just try to compare the taste of organic, grass-fed, pasture raised beef and the industry-produced one. The difference is night and day.

Those who are not concerned about the ethical or health implications of industry vs. grass-fed milk will maybe be interested in flavor. Taste is, of course, subjective and there is no one-size-fits-all, so you will need to test different brands in order to find the one that's right for you.

When it comes to consistency, industry milk production is strictly organized and will produce more consistent results regarding quality and taste. If this factor is one of your main concerns then definitely go for factory farmed.

All in all, if you want to keep it simple here is our advice - go for whole, cow's milk. If you own a café and are looking for consistent results every time, the industry-produced milk will provide you with what you need.

Those who just want to enjoy lattes at home might want to experiment with whole cow's milk from different brands and farming styles to see which suits them. In the end, you are the ultimate judge. If you wish to prepare great lattes in the comfort of your house, besides coffee and milk, you'll need to get the right equipment. Lattes are, as you already know, a mixture of espresso and steamed milk which means that you'll either need an espresso machine and a spout or simply a latte machine.

The espresso maker is more flexible and will provide you with the ability to make a great variety of hot beverages, while the latte machine will make your process bit more fuss-free but has limited options. If you're having a hard time with making a decision, you can read more about this topic here.

If you're overwhelmed by the amount of information in this article, then you can just go to the nearest coffee shop and get yourself a cup without ever thinking about milk again. However, if our writings have intrigued you, then we invite you to try out different types of milk, maybe even different methods of making lattes.

By doing this, you'll discover that coffee preparation can be as interesting as cooking is for some people and that the more you know, the more you'll want to learn.

Remember, even though we believe in a right and wrong way of doing things, the final outcome should be geared towards satisfying nobody else but you.