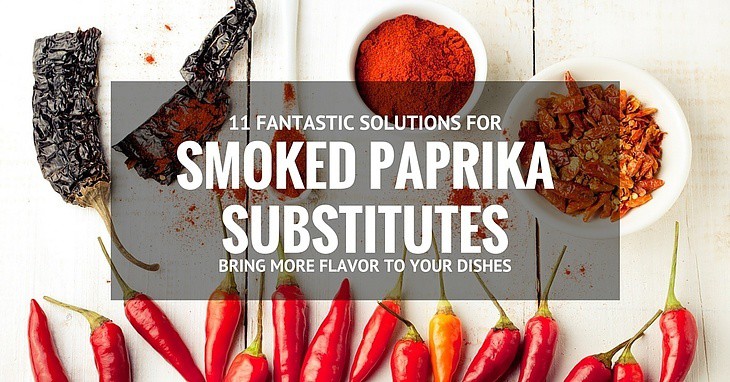 So you’re looking for a smoked paprika substitute. Perhaps you’ve stumbled across a recipe calling for smoked paprika, and you haven’t the slightest idea what it is.

We know that feeling. It can be quite frustrating, especially if you have a large, hungry crowd you want to impress with a unique dish you’re trying to cook. That’s why we’ve put together these 11 solutions to help you find the best smoked paprika substitute for your dish.

We want you to cook with confidence and courage, and some of these substitutes may already be sitting right inside your kitchen cupboard! 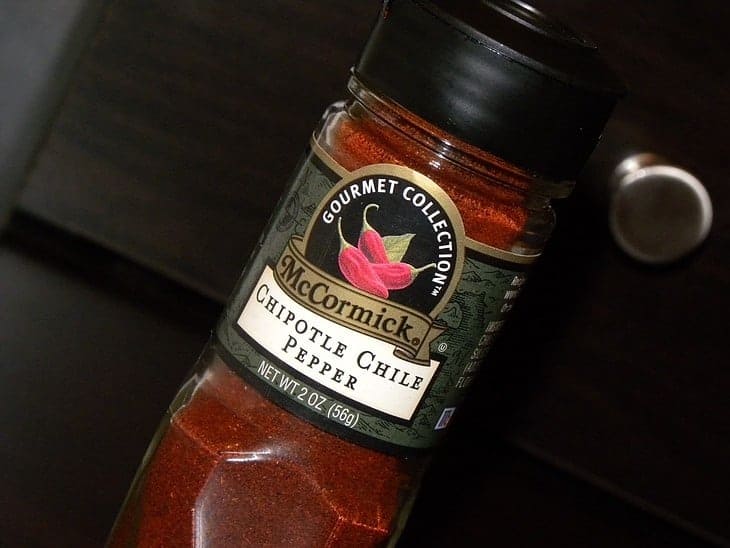 The chipotle chile pepper is actually a jalapeño pepper that’s been dried and smoked. These peppers commonly grow in South Texas and the southern New Mexico area. The name chipotle comes from an ancient Aztec word, chilpoctli, which stands for smoked chile.

Because jalapeno peppers have a thick flesh, they must be smoke dried instead of sun dried. This method of food preservation is believed to have originated in Mesoamerica several centuries prior to the Aztec civilization.

Also interesting to note is the fact it takes nearly ten pounds of fresh, red jalapeno chiles to produce one pound of dried chipotle. The process of making true chipotle is long and tedious.

While chipotle tastes smoky, it is also sweet. On the Scoville scale of heat, it ranges somewhere between 5,000 and 10,000, which is slightly higher than a standard raw jalapeno.

If you’re trying to find a smoked paprika substitute, chipotle pepper powder is your best choice. Since it is made from smoke-dried jalapeno peppers, it will give you a rich, smoky flavor. However, it’s also going to be hot, so it is a good idea to use small amounts. 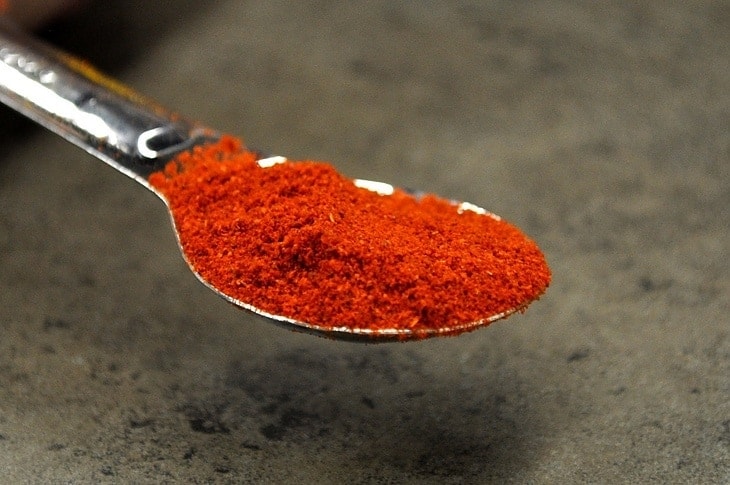 Next to chipotle pepper powder, cayenne pepper powder comes in second place as your ideal smoked paprika substitute. Cayenne pepper is a popular spice used to add flavor to many dishes, including meats, soups, pizza and even desserts, so you may find that it’s already in your kitchen!

Cayenne has a natural smoke flavor but is much hotter than smoked paprika; therefore, be careful to use it in tiny increments if you aren't accustomed to a lot of spice.

Cayenne has its origins in South America and was named after the city of Cayenne, a city in French Guiana. However, it goes by various names such as cow-horn pepper, bird pepper and Guinea spice.

Cayenne pepper is made with red chili peppers and is very hot. It comes in between 30,000 to 50,000 SHU on the Scoville scale and is similar to Tabasco in terms of heat.

Regarding cayenne pepper’s history, records exist showing this beloved pepper has been around for thousands of years. Additionally, Britain discovered cayenne pepper when it was introduced to them by India in the mid-1500s.

Cayenne has other names, including African bird pepper, African red pepper, Spanish pepper, American red pepper and Guinea pepper. In Mexico, people call it Chili, and in France, it is known as Capsique or Poivre de Cayenne. 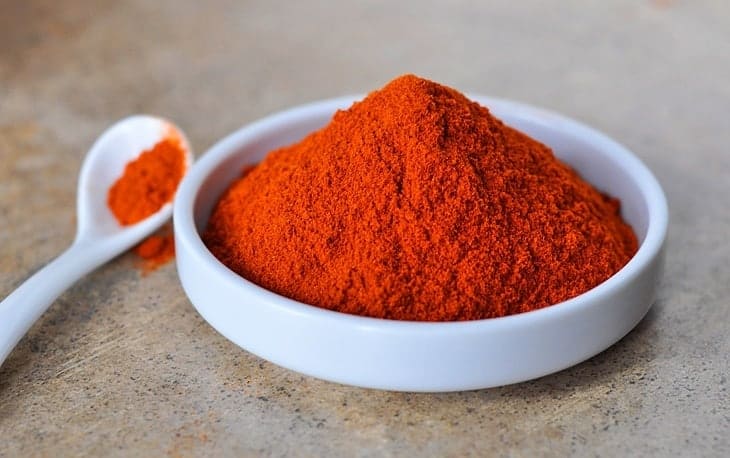 If you like the taste of cayenne pepper powder and wish to use it as a smoked paprika substitute, try Hungarian hot paprika﻿. This particular type of paprika is considered to be the highest-grade paprika you can find, since it is made in the southern part of Hungary where it originated in the latter part of the 18th century.

Then, in the 19th century, a pair of Hungarian brothers made the first mild paprika by omitting the pepper’s seeds and stalks during the process. In fact, most of the paprika sold throughout the United States comes from Hungary.

Hungary produces six different types of paprika ranging from mild and delicate to hot and blazing. For this reason, the Hungarian hot pepper version will serve as a great smoked paprika substitute for seasoning meat or for making shish kebabs or shashlik.

#4 The Combination Of Chili & Cumin Powders 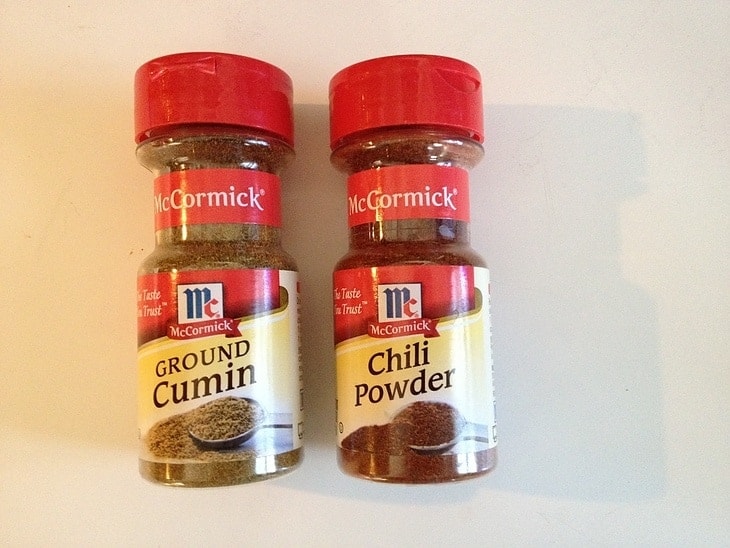 Cumin has its origins in the Mediterranean. It is a fragrant spice that carries a bitter flavor. It actually comes from seeds that are in fact small dried fruit produced by an annual plant related to parsley.

You can buy cumin in seed or powder form. The colors of cumin seed are found in black, white or amber. White cumin seeds are the most popular of the three colors, while black has an odd flavor. Cumin is a main ingredient of curry powder and it is widely used in Mexican, Mediterranean, Asian and Middle Eastern foods.

As for chili po﻿﻿wder, it is a tasty blend of chili powder, different spices and salt. Most commonly, oregano, garlic and cumin are added to some blends of chili powder.

To obtain your smoked paprika substitute, for best result, you just need to: 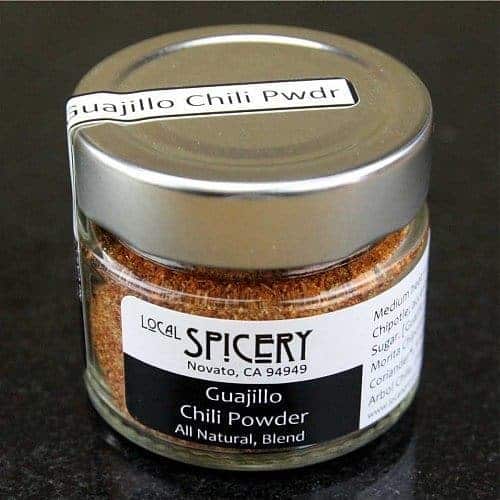 Another great smoked paprika substitute comes from Guajillo peppers, which are burgundy-colored, dried mirasol chiles. They have a tough skin and are long and glossy. When ground, they are tangy and moderately spicy.

Because guajillo peppers are slightly smoky in flavor, you’ll find that using them in pepper form will generally give your foods a similar taste to smoked paprika. While this pepper is hotter than smoked paprika, it isn’t as hot as chipotle or cayenne peppers.

Guajillo peppers are commonly grown throughout Mexico, where they are well liked and used in many favorite Mexican dishes such as mole sauce and harissa chili paste.

This ground pepper can be successfully used in soups, sauces and salsas in place of smoked paprika. In addition, this pepper has a Scoville heat range from 2,500 to 5,000, similar to a mild-to-moderate jalapeno.

Ancho pepper powder is another dried chili alternative to smoked paprika and is similar to guajillo pepper; however, it is milder and less smoky.

Similarly, because ancho pepper is not too hot, you don’t have to worry about using too much in your food, since it only ranges from 1,000 to 1,500 in Scoville heat units.

Ancho is Spanish for wide chile. Moreover, it is nearly black and is shriveled up like a raisin. This flavorful pepper is a commonly used spice in Mexican cuisine.

You also might be surprised to learn that ancho peppers are actually poblano peppers that are hung on vines to age. Once they turn red, they are picked and dried.

Some people tend to confuse the ancho pepper with pasilla and mulato peppers, which are two other comparable varieties of dried chili peppers. 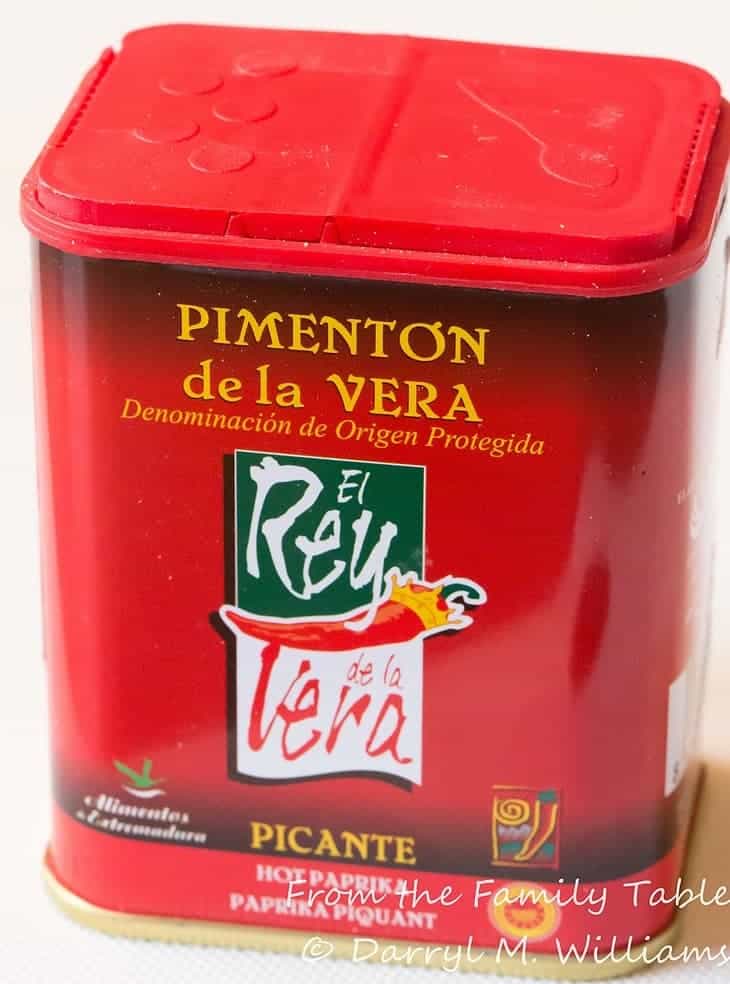 Another great alternative for your smoked paprika is Spanish pimento powder, also known as Pimentón de la Vera. This version of smoked paprika comes from Spain, the second largest producer of paprika.

If you come across Pimenton powder, you will find it wonderfully intense and full of flavor. It’s available in several exciting varieties to match your taste buds such as sweet, moderate and very hot. What gives Spanish pimento its full-bodied flavor is the oak wood that is used in the drying process.

Here are the three varieties of Spanish pimento powder. If you opt to use this spice in place of smoked paprika, be sure to select the one that you think will be most suitable for your dish and your taste buds.

If you’re the domestic type, and you have some courage, you might be surprised to find out how easy it is to make your own smoked paprika substitute!

The man in this video below will show you how to smoke, dry and crush hot peppers. If you have a large amount of chili peppers, this is a great way to make use of them.

However, if you want to play it safe and just make a small batch of ground, smoked paprika, check out the video below to find out how easy it is to do at home.

All you need are some smoked and dried chili peppers and an electric coffee grinder, and you’ll have some ground smoked paprika in a jiffy!

Here are the ﻿﻿steps to making your own smoked paprika: 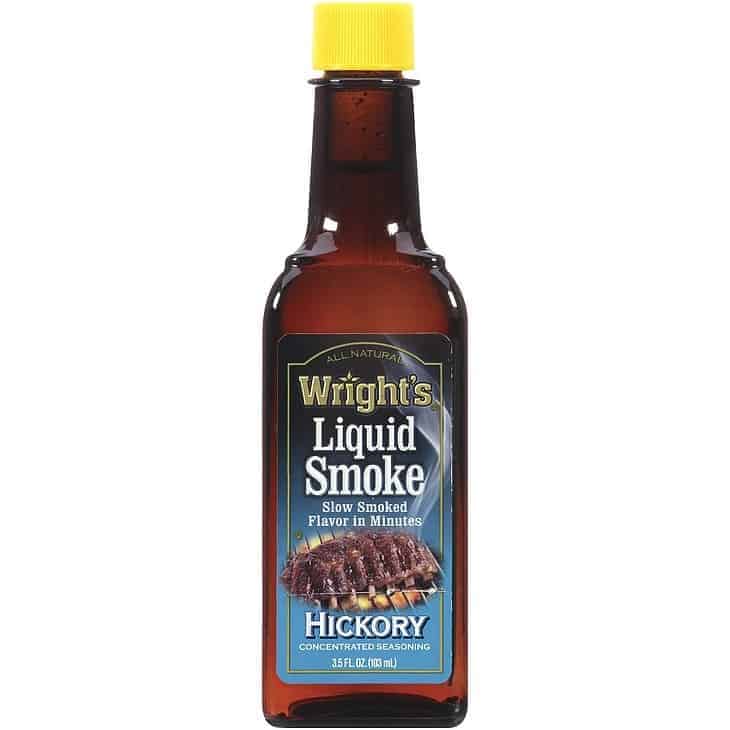 If you like the taste of hickory smoke, try mixing a few ingredients you might have hidden away in your kitchen for a great homemade smoked paprika substitute.

Liquid smoke comes in several flavors such as mesquite, hickory and Applewood, which allows you to get just the right smoked flavor for your dish. The ﻿﻿liquid smok﻿﻿e gives a tasty barbecue flavor to your concoction, which you can use for grilling or in your soups, stews, and on poultry and other meats. 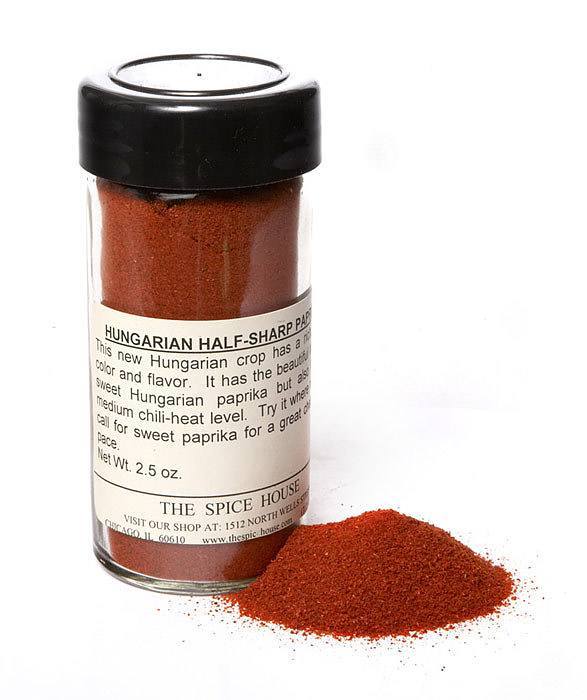 If you have heard of Hungarian half-sharp paprika, you may discover that it could make the perfect smoked paprika substitute for your food.

As a moderately hot version of Hungarian paprika, it goes well with foods like beans, chickpea stew and spinach.

Hungarian half-sharp paprika powder can be used sparingly in your foods, as a little will go a long way. However, you can also mix it with sweet paprika for a milder flavor.

A further smoked paprika substitute is ghost chili pepper powder. Also called Naga Bhut Jolokia, the ghost pepper is considered to be one of the world’s hottest peppers.

Consequently, you should use the ground version very sparingly. In fact, it is rated as high as 1,041,427 Scoville heat units, so be extremely careful how you use this product.

If you can handle the heat, use ghost chili pepper powder for any recipe from chicken to pizza sauce. Chili Pepper Madness features a ghost pepper chili hot sauce recipe that can be adapted for a number of your favorite dishes.

Ghost chili peppers are found in India, and to this day, they grow exclusively in the northeastern part of the country in the states of Assam and Nagaland. The pepper was discovered in 2000, and only the natives were using it in cooking. 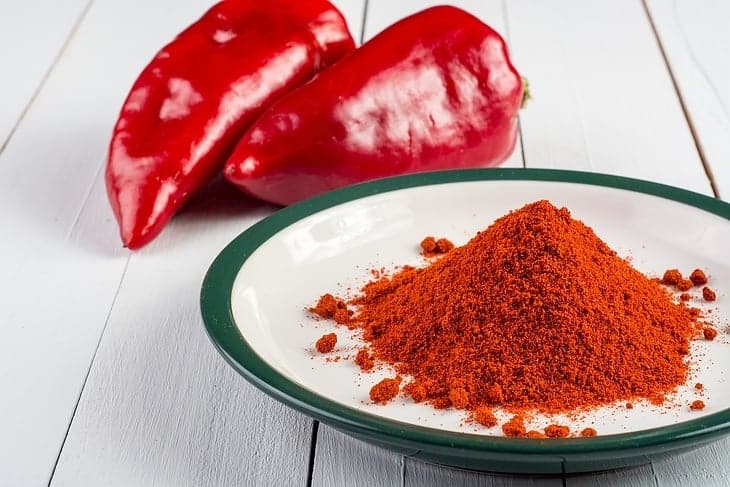 Did you enjoy reading this list of smoked paprika substitutes? We hope that it inspired you with confidence to create amazing dishes that call for smoked paprika.

It’s a comfort to us to have the internet to rely on whenever we need information about an ingredient, recipe or substitution. If you have any thoughts about anything here, we invite you to write them in the comments section below.

In addition, if you’ve benefited from the information in this article, we would appreciate it if you’d share the article with your friends and family.