A countertop convection oven is a cook’s fantasy. It heats food evenly and quickly, and it can save space in the kitchen.

The best countertop convection oven saves energy and time, using lower temperatures than conventional ovens to cook the same type of food. It’s a great way to add an extra cooking element to your kitchen without redoing your conventional oven.

Learn all about the benefits of a countertop convection oven and how to select the best one for you.

How Does A Convection Oven Work?

In a conventional oven, a heating element warms up the air within it in order to heat food. The air stays stagnant, and the areas closer to the heating elements are usually hotter than the area in the center of the oven.

In a convection oven, the heating elements are usually placed at the top, bottom and back of the appliance. A fan circulates the air around the food. This allows every area inside the oven to reach a consistent temperature.

It also eliminates the narrow layer of cool air that can surround the food and insulate it from the heat. The top and bottom of the food will cook just as well as the center. It doesn’t matter where you place the food within the oven as food on all of the racks will cook at the same temperature.

Can A Convection Oven Replace Your Microwave?

Microwave For Warming Up Foods 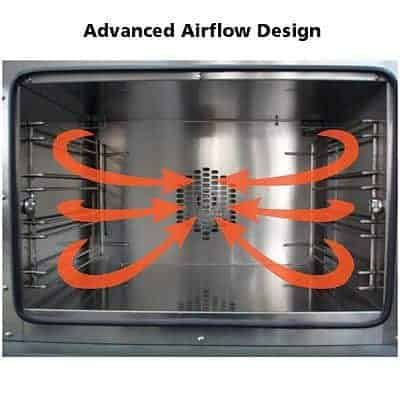 A microwave is typically used to warm up foods, and it doesn’t use airflow to cook items evenly. It has a singular heat source, which ends up steaming your food instead of cooking it. This can lead to loss of flavor and limp food.

You also can’t prepare traditional baked goods in a microwave. Although it’s possible to find recipes for cakes and muffins that you can make in a microwave, the recipes tend to be altered, and you most likely won't achieve consistent, high-quality results.

Convection Oven For A Consistent Temperature A convection oven is more like a traditional oven in that it browns the surface of the food and helps it develop and retain its flavor. You can preheat it to achieve a consistent temperature before inserting the food, allowing you to make cookies, cakes, brownies and breads in a convection oven.

Because convection ovens can be used like a microwave to reheat foods as well as like a conventional oven to bake and roast meals, they're usually more expensive than microwaves.

A countertop convection oven can accept any type of cookware that you would use in a conventional oven. High-quality glassware or any oven-safe dish can be used in a convection oven, except for plastic, even if it's safe for use in microwaves.

You also can’t load a regular dinner plate to reheat food in the convection oven unless the plate is safe for use in a conventional oven. Unlike a microwave, a convection oven can accept metal containers.

When using a convection oven, you should treat the exterior as you would a toaster oven. You can’t place heat-sensitive items on top of or around the appliance because the outside of the oven will heat up. You can use the top to warm up your dishes, however.

Benefits Of A Countertop Convection Oven

A countertop convection oven can make your food taste better, even if your cooking skills haven’t improved. This type of oven has several advantages. It's also very convenient. If you’re cooking small meals in an apartment, you might be able to trade a regular oven for a countertop convection appliance. If you're cooking large meals, you don’t have to buy an extra full-size oven. 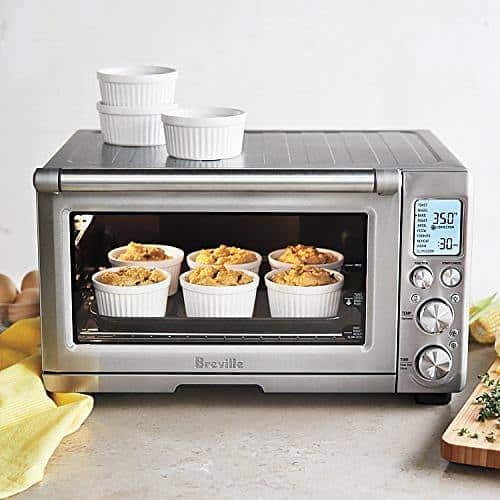 Because convection ovens are smaller than traditional ovens, there is less space to heat. That, in addition to the shorter cooking times, means that you use less electricity than you would to cook the same meal in a conventional oven. As mentioned above, you can use top of the oven​ to reheat your dish. Some countertop convection ovens even have hot plate electric cooker on the top, so much time could be saved with this kind of oven.

*Below, you'll find our more detailed reviews, but you can also click the links above to see current prices or read customer reviews on Amazon.

This convection oven can be used to reheat, toast, broil or bake foods quickly and easily. Nine pre-programmed settings take the guesswork out of cooking with this appliance.

If you’re roasting a large piece of meat, set the oven to the “Asado Roast” function to ensure that you’re using the proper amount of heat. Use this oven to sear the meat so that you don’t have to sear it on the stove first.

If you’re making pizza, you can ensure that the crust is optimally crispy with the “Pizza” setting. The inside of the oven has a non-stick surface that makes it easy to wipe down. This oven comes with a one-year, hassle-free warranty.

This convection oven is compact enough to fit in almost any kitchen. Although it's smaller than other models, it features a unique extension in the back to accommodate larger round items.

The digital display is large and easy to read, although some users say that the text on the buttons is more difficult to make out. A variety of settings allow you to cook foods with one touch, and the toast setting allows you to adjust for varying levels of crispness.

If you use the timer, the oven will automatically shut off when cooking is complete. Because the vents are only located on the right-hand side, you can place other appliances close to the oven on the left-hand side. This oven comes with a two-year limited warranty. 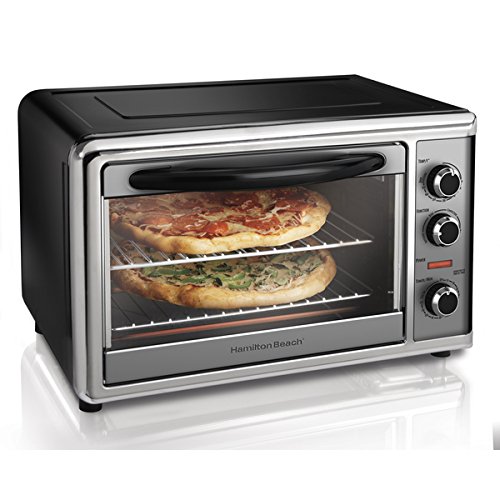 The revolving rotisserie feature on this oven adds to its versatility. Meat turns and self-bastes as it cooks, ensuring more even cooking without excess moisture loss. It can fit a 5-pound ﻿﻿﻿﻿chicken﻿﻿ or two 12-inch pizzas better than many other countertop convection ovens.

This oven claims to include a toast function, but some users argue that it does not. The broiler function can double as a toast function, however. The oven also comes with two cooking racks, two baking pans, a broiler rack and rotisserie accessories, so you'll be ready to make all your favorite dishes right from the start.

This oven has an interior that can accommodate a 13-inch pizza, a Dutch oven with a lid or a 5-quart container without a lid. The interior light allows you to see what you’re cooking without opening the door and losing heat.

It also includes a slow-cook function that can run for up to 10 hours. This feature automatically switches to a warming function when cooking is completed so that you can keep your food warm until you’re ready to eat.

The LCD display changes colors and is easy to read, and functions include a frozen food setting. It comes with a 12-inch square baking pan, an enamel broiling rack and a 13-inch pizza pan.

This is a powerful and versatile oven that features baking and rotisserie options. The large interior capacity fits standard-sized baking sheets and pizza stones. This is an uncommon feature in most convection ovens, which are usually smaller.

Most convection ovens only heat to up to 475 degrees Fahrenheit, but this unit reaches 500 degrees. It also includes a variety of settings that allow you to adjust the type of heat based on the food that you’re cooking.

The oven must be cured to release certain chemicals from the finish before its first use. You may want to do this outside so that the smell from the process doesn’t permeate your home environment.

Which Countertop Convection Oven Should You Buy?

If quality and cooking consistency is important to you, you may want to spend more money on your convection oven. Many of the lower-priced models do not achieve consistent cooking temperatures, although they still cook your food in less time.

Overall, we preferred the Breville Smart Oven P﻿ro. It costs more than the other models that we reviewed, but it’s the most reliable option.

Its slow-cooking feature makes it even more versatile than the others, although we love the rotisserie feature on the Hamilton Beach and Waring Pro ovens. The Waring Pro model was just too expensive compared to many of the other available options for us to give it the highest rating.

Have you used one of these countertop convection ovens? Let us know in the comments below if you found this article helpful, and share it with your foodie friends.